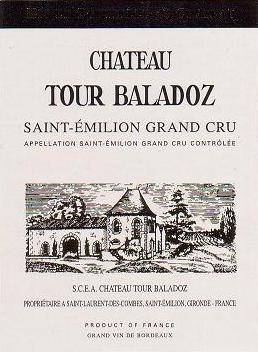 May 1950: acquisition by Emile De Schepper

A letter from Libourne dated 26 April 1950, sent by Emile De Schepper to his wife in Ghent (Belgium) tells us that the estate Château La Tour Baladoz was going to change hands the next day. The estate, located in Saint-Laurent-des-Combes, included a manor house, a vineyard worker’s house, a cellar, a vat room, quarries, and 5.56 hectares of vines.

The name “Valados” first appeared in “Le Producteur” in 1841, and was included in the first edition of “Cocks and Feret” (Bordeaux and its Wines) in 1850 under the name of “Baladoz”. From 1874 to 1922, the estate was known as Château Baladoz. Of course the name changed to Château La Tour Baladoz after a tower had been built on teh premises.

The estate is originally mentioned in a category between the 1st and 2nd Crus of Saint-Emilion, and later as a grand cru. The tenth edition of Cocks & Feret describes the château as follows:
“Remarkably well-sited, Château Tour Baladoz is located on the highest point in the region and affords visitors a superb panorama of the local countryside, including vine-covered slopes and stone walls. Entirely planted on clay-limestone soil, on a layer of bedrock, this vineyard of approximately 5 hectares features the finest premium grape varieties. It produces a very generous, aromatic, soft, extremely fine wine which has all the characteristics of a “grand premier cru”. Annual production varies from 18- 22,000 bottles.”

The new owner spent the first year renovating the cellars and making improvements of the vineyard. There was also a manager appointed, since Emile De Schepper could only visit the estate 3 or 4 times a year. The wine was exclusively exported in barrels to Belgium, where it was bottled in the owner’s cellars (in Ghent), since he was working in the wine business.

From 1970 onwards, Emile was assisted by his elder son Firmin who gradually took over running the estate. Firmin decided to conduct a strict quality-oriented policy, which increased the wine’s reputation.

The De Schepper family considered expanding the vineyard for several years. Finally, in 1984, an opportunity presented itself, and they were able to buy 3.74 hectares of vines forming an estate called “Roquettes Mondottes”. The plots were very close to Tour Baladoz so it seemed only logical to acquire them.

At that point, the estate now had about 9 hectares of vines. After Firmin’s death in 1987, his younger brother, Jacques, completed the job of combining the two estates into a single vineyard. The vat room at Tour Baladoz was enlarged and new stainless steel vats were introduced. A new manager, Jean-Michel Garcion, was appointed in 1992, and the search for quality intensified.

Rather than to feel at ease, the new team undertook particularly ambitious projects in the vineyard, convinced of Château Tour Baladoz’s bright future! Every detail mattered: after investigating why the yields had been so low until that time, priority was given to picking the grapes at just the right degree of ripeness and then carefully sorting them before they arrived at the cellar.

Fermentation in small vats made it possible to keep close track of wine from different grape varieties and different plots. The choice of barrels was based on the characteristics of each vat. Words that kept coming back throughout all these changes were rigour and quality.

In 1999, a new barrel cellar, considered to be essential to produce great wines, was built. This implied digging into solid rocks for nearly a month but the result was well worth the effort. The wine began to be aged under the best possible conditions for 12-18 months (depending on the vintage) before it was bottled at the Château.

This estate’s long history, the quality of its terroir, and the carefulness that is present in every stage of the production – from the vineyard to the bottling line – now ensured the worth and reputation of this wine.

Those who are fortunate to already have walked on the paths of the French agglomeration Saint-Emilion have perhaps, without realising, entered the land of château Tour Baladoz. If you would like to see one of the most magic and diverse landscapes in the area, you have come to the right place at château Tour Baladoz.

The estate has, on certain locations, an altitude up to ninety metres, which is nearly the highest altitude in this designation. Moreover, there is the plateau that dominates our estate and that consists of a soil dominated by clay and limestone.

South of the property we find the grand Crus of Saint-Emilion among others château Pavie, château Bellefont Belcier, château Larcisse and Ducasse and of course the plain of Dordogne.

We cannot deny that we have one of the largest vineyard sites in the designation. Moreover, the land covers the rocks of the river the Gironde that are underground at a depth of 30 to 50 metres.

The question is how to make a wine that is as mineral as the geological environment where its origins lie? Most of our vines are planted on the plateau that rests on two or three layers of quarries that are sometimes sunk in the ground for more than eleven metres. It is not uncommon to find at a depth of eight to ten metres, in the heart of the earth, even between the rocks, clusters with hair roots of vines that capture the humidity present in the air.

70% of our vineyard is located on the plateau while the other 30 % is located on the slopes of the valley. There we discover, not much to our surprise, that the vines planted there also dispose of a large wealth and a territorial diversity.

The bottom varies from pure chalk and mart, which reminds us of certain terroirs in the Champagne region, to freestone that appears occassionally and is noticed because of the colour variation in the clay (red, chalk-clayey colour and even blue, which reminds us of the terroir of Petrus).

Indeed, you have understood very well that, just like the entire group of geology experts that have studied this case, you are witnessing a fabulous potential. This type of soil is preferably planted with the Merlot grape. That is why 70% of our vineyard is planted with that particular grape. However, we chose nonetheless to complete our blend with the Cabernet Franc (20%) and the Cabernet Sauvignon (10%).

In the mean time, it has already been confirmed many years in a row that the quantities mentioned above adapt incredibly well to this type of terroir.

During the entire growth period, and even before, during the winter, we do everything in our power (double Guyot system, thinning out, suckering, green harvest, two times leaf stripping) to obtain the healthiest and ripest grapes for our wine cellar. It is very clear that, by sorting the grapes twice, we can produce a wine of outstanding quality every single wine harvest.

Then the process of wine-making and after-care begins. At the beginning of the barrelling process, the wine is pumped over several times to strengthen the colour extracts and the temperature is kept low to preserve the delicat fruit aromas. It may occur that after a period of 24 to 36 hours the grapemost has already obtained its final colour. The alcohol fermentation at the beginning of the process is slow but regular and the sugars are converted to alcohol.

We use this phase in the wine-making process to spray the grape marc frequently, sometimes up to four times a day and to monitor the intrinsic quality of every wine and every vintage year.

Spraying the grape marc is also a method to provide sufficient oxygen necessary for the yeast to develop and also to incourage the stabilisation of the tannins.

The maceration lasts for three to five weeks. The wine is then drained off, the grape marc is pressed and the press wine is, depending on the quality, blended or kept apart for an adequate treatment.

The malo-lactic fermentation takes place in tanks with temperature control and the transfer to tanks takes place immediately after it has been racked twice and after sulphite has been added.

After that, everything stays in tanks for three to four months after which the wine is racked in oak barrels, 70% of which is renewed every year and 30% of which has only been used for one year. The wine is then let to ripe for a period ranging from eleven to fifteen months according to the vintage year. As a last step we start with the final blending.